The play will transport the audience into the 12th century Jerusalem – the place, which became a field of war between the great world religions, Judaism, Christianity and Islam.

The play is as relevant to our times as ever, speaking about the conflicts that roil the world today. “Nathan the Wise”, a utopian tale of the Age of Enlightenment (18th century), exalts the human mind and its power to make the world prefect and tries to convince us that the three sons – three religions – can live in peace and harmony.

According to the director of the play, Gintaras Varnas, it is important to focus on similarities rather than differences between us: “The only true religion is love. We all in this world belong to the same family”.

Nathan the Wise with English subtitles will be shown at 6 pm on Tuesday, 9 October. More about the production here. 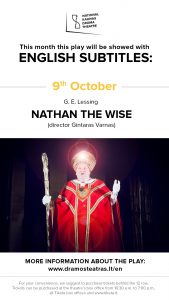