The play will transport the audience into the 12th century Jerusalem – the place, which became a field of war between the great world religions, Judaism, Christianity and Islam. It is a utopia, telling a tale of a man who had a magical ring. Whoever wore the ring was followed by God’s grace and glory. The ring was always passed from one generation to another to the most beloved son in the family. Once, however, it ended up in the hands of a man who had three sons whom he loved equally. The man could not make up his mind to whom he should give the ring. Before his death, he went to see the jeweller and asked him to make two more such rings. Then he secretly gave a ring to each of his sons and passed away. When the sons saw that all of them had rings, they began quarrelling and arguing. Which ring is the real one? Which two are worthless copies? Who is destined to become the chosen one? Three religions – Judaism, Christianity, Islam – even nowadays try to prove that only one of them is true and fair.

The play is as relevant to our times as ever, speaking about the conflicts that roil the world today. “Nathan the Wise”, a utopian tale of the Age of Enlightenment (18th century), exalts the human mind and its power to make the world perfect and tries to convince us that the three sons – three religions – can live in peace and harmony. 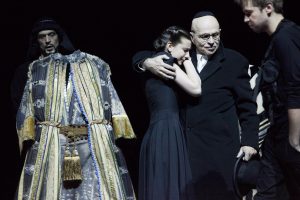