The International Association of Schools and Institutes of Administration (IASIA) and Kaunas University of Technology (KTU) are organizing an IASIA Regional Conference to be held on 24-25 April 2019 in Kaunas, Lithuania.

The conference will bring together practitioners, academics, PhD students and researchers in public administration and management, as well as contributors from any other disciplines who will exchange their research findings and insights from practical experience on the following theme ”Corruption, Ethics and Culture in Public Administration.”

Corruption is not a new phenomenon and is a term that has many meanings. Tiihonen argues that corruption “is commonly understood to be bribery, and accepting a bribe, and other unjustified influence, by giving and receiving benefits. A usual list of corrupt acts includes bribery, extorsion, influence peddling, nepotism, fraud, speed money, and embezzlement” (2003, p.5[1]). Corruption is a phenomenon which undermines public governance and principles of responsible management, and therefore citizens’ life quality and well-being as well as their trust in public officials and institutions. Among others, effective enforcement of public values, institutional ethics and personal honesty and integrity inculcation are a means of containing corruption within acceptable limits (Caiden, 2001[2]).

In the last decades, governments and international institutions and organizations have drafted and formally adopted standards of professional conduct, ethics codes and charters for individuals holding public office (CNFPT and IASIA, 2018[3]). For instance, in  2001 the European Union has adopted “The European Code for Good Administrative Behavior”, and then in 2012, “ The Public service principles for the EU civil service” through the European Ombudsman; similarly in 2013 the United Nations have adopted the “Standards of Conduct for the International Civil Service, International Civil Service Commission”, and in 2015 the Sustainable Development Goals where Goal 16 focuses on institutions and several of its targets encouraging the fight against corruption and building effective and transparent institutions which serve the citizens. Adopting legal frameworks  and “soft laws” in the form of behavior standards at national and international level is crucial. Nevertheless, greater attention must be given to the implementation, monitoring and improvement processes.

Recent developments in politics at international level demonstrate that trust in government has declined. In many developing and developed countries public institutions are perceived as a corrupt environment. In this regard, public institutions must regain citizens’ trust by delivering high quality services and by upholding their high professional standards that include high ethical standards in their professional behavior.

In many countries there is a general belief that corruption is part of the human nature,, “it is in the blood,” whereas in others it is a matter of choice, rule of law, education and transmission from one generation to another of what is right and wrong (Caiden, Dwivedi and Jabbra, 2001, p. 5[4]). Indeed, socio-cultural context plays an important role in fighting negative phenomena such as corruption. In practical terms, a system with a meritocratic bureaucracy and an administration concerned with accountability, transparency, openness and inclusion is much more effective in fighting corruption and, at the same time, in promoting high ethical standards and public values.

As corruption and ethical values are socio-cultural context sensitive, we call for contributions highlighting the role of different societal and political stakeholders in understanding and preventing corruptive practices and promoting ethics in public administration. In addition to macro level issues, organizational contexts which are successful in dealing with challenges to good public governance and implementing value-led management call for academic explorations and practical reflections.

The conference addresses the need for research-based evidence in respect of the relevance of citizen participation in public governance as well as the importance of moral decision-making to corruption prevention.

Participants could also address the following questions (the list is not exhaustive):

The International Association of Schools and Institutes of Administration and Kaunas Technology University invite interested individuals to contribute to the 2019 IASIA Regional Conference. Abstracts (400 words maximum) should be submitted by 1 February 2019, to the Organizing Committee: 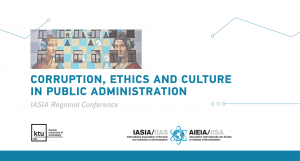 [3] CNFPT and IASIA (2018). Charter for Civil Servants on the Meaning and Purpose of Public Action. Paris: CNFPT.

Įtraukti į iCal
Suggest an Event
We are using cookies to provide statistics that help us give you the best experience of our site. You can find out more or switch them off if you prefer. However, by continuing to use the site without changing settings, you are agreeing to our use of cookies.
I agree