World War II. Nazi-occupied Lithuania has become a death trap for Jews. Men, women, and children are imprisoned in ghettos and the only way out leads to a pit in the ground. “Ghetto” is a story of how people imprisoned in the Vilna Ghetto came up with a unique idea – establishing a ghetto theatre, which even in the face of death became their beacon of inner strength and resistance against the Nazi. This is a drama about their collective fight for physical and spiritual survival, even when they knew that the enemy was a hundred times stronger. “Ghetto” also tells the story of those who were holding the guns and trading shoes of their victims among themselves. Never before had Lithuania seen so many pits in the ground and so many spare shoes as in 1941.

Two-act play together with the UTOPIA theatre

The performance is showed with ENGLISH SURTITLES all the time. 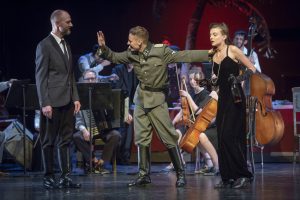