16 June “The Forest Brother”, a play, telling an unbelievable story of the man, who has been hiding in forest for 50 years will be shown on Kaunas National Drama Theatre stage. International Kaunas guests and residents are invited to enjoy the play, which will be translated and shown with English surtitles.

Journalists of the entire world were fascinated by his story. Jonas Petrutis has been in town twice, had no wife and children, worked nowhere and he could not hurt a fly. He ran away from the army, lived in his sister’s shadow and believed that it was God who saved him from the wolf. Definitely he was not the forest brother who spent days and nights in partisan bunkers with a gun and the last bullet in his hand. Jonas did not want to fight or resist. He decided to retreat from the battlefield of the World War II and hide for 50 years. But he was not the only stranger of those times. Another one was Jānis Pīnups who lived in Latvia. The cast has brought the act onto the stage of the National Kaunas Drama Theatre.

For your convenience, we suggest to purchase tickets behind the 12 row. 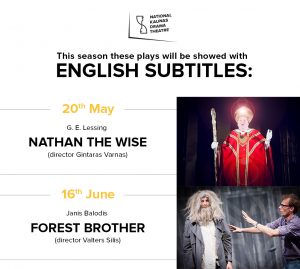